A day on the Trails - A women guide

Preparing for a day on the off roading trails for a woman is a bit different from a guys. Guys make sure they have tools, extra parts, fluids, winch controller, tree savers, tow straps, fire extinguisher, etc. and they're ready to go.
Now when a woman goes they think of essentials needed throughout the day to make it a little more enjoyable and comfortable.
First, lets look at safety and nuisance items.
First aid kit is a must! What if your guy smacked his knuckle and busted it open while changing that tire that blew?
How about the stinging Nettle plants? The Band aid itch gel is great, or as our daughter calls it "the magic gel". Takes the sting & redness out immediately.
Now bugs...
The gel works great for stings but what about the ticks. Learned a trick from an Army Ranger that sounds really weird but so far works every time. You know the paper matches? Take the sulphur head off of one and swallow it. The sulphur comes out your pores and the ticks will not latch on. They may crawl on you but won't dig in.
Gnat's an annoyance? Mix about half of a bottle of vanilla with water in a spray bottle and spray yourself. Really works and smells good too. You may have to re-apply every few hours but who cares.
Pack a small cooler. Be sure to fill it with water and sport drinks to keep hydrated on the those hot days. You'll want a minimum of 3 drinks per person for a full day of wheeling. Bring things to make sandwiches for the lunch break; bread, lunch meat, condiments. Bring some fresh fruit for energy. Pack some chips for the junk food if you need it or do trail mixes for a healthier side. I've even brought yogart on the trails!
Well, what else do I carry in my pack on the trails? Toilet paper, a few empty baggies for used TP (don't leave anything on the trails or in the woods), wet wipes for quick clean up, healthy snacks, a camera, extra batteries for the camera, a trash bag .
Now if you have kids with you. You will want to bring something to keep them busy in case there is down time. There are break downs on the trail and the last thing the guys working on a rig wants is a kid in the way. Bring baggies and maybe a camera for the kids to use. Leave the video games, ipods and phones at home! Enjoy nature!
There are always things to find on the trails if you look hard enough. We've found clay, different weeds make beautiful bouquets, deciduous tree beads, rocks, geodes, fossils, nuts, pine cones and all kinds of things. Kids love finding new things on the trails. And don't tell them, but they're learning things! We have a wonderful friend that knows all kinds of nature stuff and shows our daughter. We have quite the unusual collection of things and pictures that our daughter has brought home along with some great memories.
It truly is a family sport and quality time together as a family! Enjoy it! 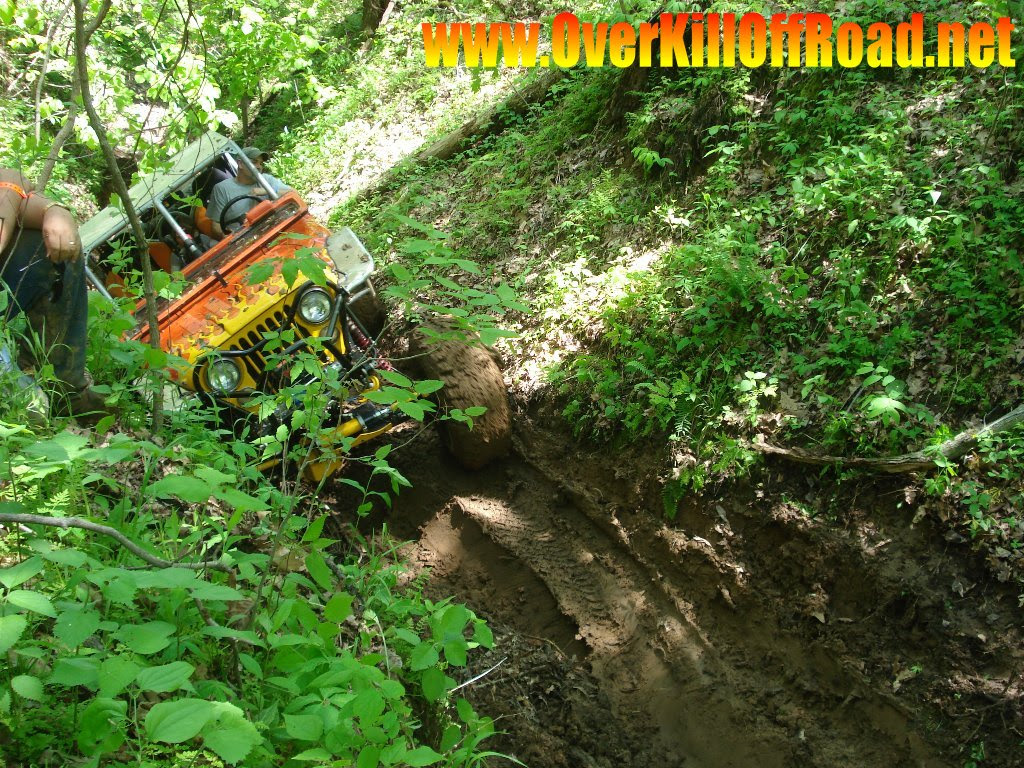 Once again, we had a great time on the trails at the 4x4 Safari put on by the Two Rivers Jeep Club in Southern Illinois!

The first day we headed to the trail Myer's Mayhem, a trail that we've done a few times and really like. Well, this time was a bit different. That area of Illinois had a hard winter with lots of ice and recent rain, so the trails had lots of down trees and very wet. We were only able to do about half of the trail and didn't even see our 2 favorite obstacles this time. We had about 10 Jeeps and a Toyota truck with us.

The first hard obstacle that we came to was a steep muddy hill climb. Nobody made it up even half way, except for us! OverKill's Jeep made it to the top without to much of a problem but lots of mud flying! It was a rush!

The second one was called Hell's Gate. A steep incline (again muddy) to get out of a ravine. It is very common for Jeeps to end up on their sides at this point. A tire has to be in the air when trying the exit properly. Everyone one (except us), was winching out of it. Oh, and we had a little puppy following us all day, so the kids named it Lost. Hope she's okay... 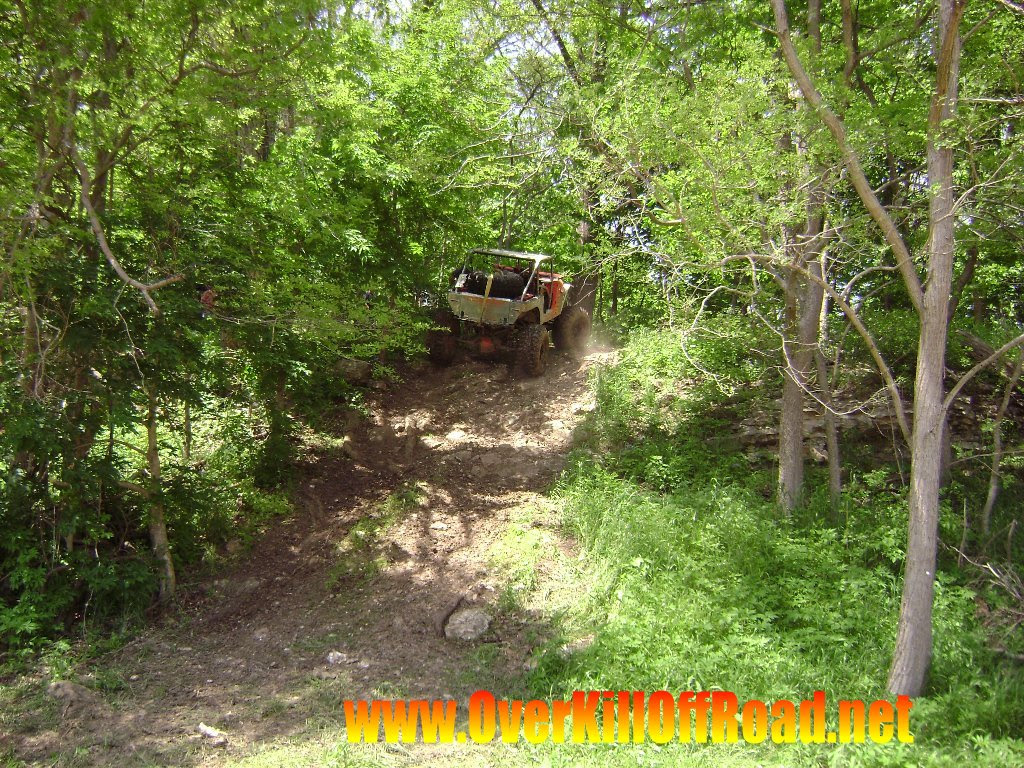 The second day we decided to go on the Susie's Knob trail again. OverKill's Jeep made it up Warren's Revenge with out any issues this year!! (Last year a drive shaft separated as the top was reached). Warren's Revenge is a large rock waterfall and it's at the beginning of the run. Lots of Jeep's break on this obstacle, mainly drive shafts. I had video but the disk decided it didn't want to finalize right, so I lost it... Guess we'll have to do it again next time. The highlight of this run was giving the Toyota a tug out of Full Throttle! I told him he needed to take off an anti-Jeep sticker but he wouldn't do it.
Another Safari on the books and a great time! Looking forward to the 4x4 Blast in August with TRJC!!! Which BTW is now open for registration!
# posted by OverKill Off Road @ 7:35 AM 0 comments

It's that time of year again with Two Rivers Jeep Club putting on the 4x4 Safari! This is one of our favorite runs of the year.
The whole town gets behind this club and this club helps the community with these runs. They raise money for childrens sports and help the people that need help in the area.
All of the trails for these runs are on private property and the club works really hard to maintain them. The trails range from mild to pretty wild! There are pixtures on our website of some pretty exciting times with a video or 2!
I just heard from one of the members down there, and their registration numbers are really down. If you're within a days drive to this, we highly recommend this event. There are door prizes and auctions and raffles both nights, that sometimes get a little crazy. You wheel all day for 2 days. They feed you breakfast and dinner! You can buy sack lunches across the parking lot for the trails. It's top notch and very well organized.
No, we're not getting anything for letting people know about it. We just truly believe it's a great run and we love how the Club donates everything they can back to their local community. This is one of those runs that we said we would not miss since the first one we attended. I actually volunteer to help with registration check-in!
Besides, wait until you see the new modifications we did to the OverKill Jeep this year! (more on that later).
Come on, register for a Safari!!!
# posted by OverKill Off Road @ 6:02 AM 0 comments

I can't believe it has been over a year since I've had a chance to update this. Things have been a bit busy to say the least.
Lets see.... Runs that we attended last year.
TRJC 4x4 Sarafi - always a great run!
TRJC 4x4 Blast!
NIJA's 1st Annual Newbie run (Lilly stuck the OverKill Jeep pretty good with water bubble out the louvers)
NIJA's 6th Annual Girls Like to get Dirty Run This was just plain fun!
Oct. Badlands with Buds We did quite a few of these at various places but didn't take pix.

Those pictures should keep you busy for a bit! Be back soon!

Wow, it's been a long time since I've updated this and some fun things have happened.
First, we opened a second site for off roading parts and fabrications! www.OverKillOffRoad.com It will be expanding as the year progresses! www.OverKillOffRoad.net is still up and running and will be used for custom builds and information!

Second, NIJA (the local Jeep club) had a ladies run which was a lot of fun and laughs. I'll post more on that later, but you can see some of the pix, just click here!

Third, we've been busy but Mark just had to take time out to build an amphibian 6x6!

Will try keeping this updated a bit better in the future!

Well, we arrived back from the 4x4 Blast! Overall it was another great experience and killer 4 wheeling! I took quite a few pictures, that you can see HERE, and some fun video but I haven't edited or uploaded it yet.
We did "test" our tube fenders again and they held up great but we did get another rather large dent in the hood, On the driver's side this time! The video of that is coming. Lets just say; big ravine, clay mud and rock walls and BIG 2 step incline to exit. The pictures really don't do this "obstacle" justice, lol!
We will be going back!!

Remember the run we went to in the Spring put on by Two Rivers Jeep Club in Pittsfield, IL? Well, next weekend is their 4x4 Blast and we'll be going again!
I was telling everyone that there is no way we would go South in August! Too damn hot here, much less heading South! Well, we had such a great time and it was so well organized that we will be going. According to Mark, we will not miss their runs in the future!
If anyone is going from here, look for the flamed CJ and come say hi!

We are now the official distributor for Blue Torch FabWorks in our area and on the web!! We will soon be expanding and adding on to our OverKill Off Road website to include some of BTF items and our items using some of BTF's parts! Be sure to stop by!